Unlike the BNP, self-respecting political parties don’t hold their Emergency General Meetings in East London’s notorious Elm Park pub. I know. It is where I roughhoused, before I made a bid for respectability and left. My memories of the place are bitter-sweet.

I was raised in Elm Park, having been born in nearby Romford. Elm Park was and remains almost exclusively white, lower working class. It is perhaps the most chav chav-town in chavdom. 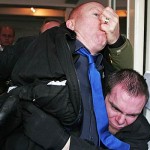 Built in the late 1930s, Elm Park was designed to attract young working class families seeking to escape the worst of London’s smog. Its housing consists of well-built three-bedroomed semi-detached properties with back and front gardens. Its streets are tree-lined. There’s a healthy mixture of council houses and privately owned homes in an urban setting on the edge of London’s greenbelt, wedged between Dagenham and Hornchurch. There are parks nearby and a very good swimming pool. It has much going for it.

My parents arrived and met in Elm Park just before the Second World War. They lived next door to each other. My dad’s a Hackney boy and my mum’s from East Ham. They went to school across the road from Hornchurch airdrome, which played a major part in the Battle of Britain.

My father pays homage every year to an American airman who crash-landed his plane into the playground wall rather than risk smashing into their classroom by attempting to fly over it. The class saw the plane dip away from them and explode. They were covered in glass. The boy next to my father was injured for life. And ever since, the old boys meet annually at the pilot’s grave to say thanks to the Yank. Yes, there’s a good heart in Elm Park.

There was plenty of work in the early days. There was a massive Ford factory in Dagenham, as well as the pharmaceutical company May & Baker. There was Roneo Vickers, then Britain’s largest manufacturer of office machinery. And, not least, there were London’s East End docks working at full capacity.

My dad worked on the buses as a conductor. My mother worked at May & Baker. My grandmothers worked at Roneo Vickers. One grandfather was a leading communist shop steward at Ford’s (he left the party in 1956 in protest against the crushing of the Hungarian uprising by the Soviet Union) the other was a self-employed Tory-voting builder.

But something went wrong in Elm Park. Part of the problem was the run-down of both Ford’s plant and London’s docks. But seeing as we were connected to the rest of London by the tube, I don’t buy that explanation for my town’s decline.

Elm Park began its big slide from working class respectability to chavdom in the early 1970s. Elm Park somehow came to embody all that was worst about Britain’s loss of direction at that time. The kids got out of control. We glorified in football hooliganism and ignorance. Our low-grade local schools told us we were there to be trained as manual workers. We said “stuff that”, we don’ want to be like our parents.

For many the rebellion meant giving up on education and ambition. For a few, like me, it meant going up the ladder.

Since the 1970s, the Elm Park pub has been the haunt of gangsters, druggies and football hooligans. I learned to drink and to fight there. The room in which the BNP met was where I practiced karate. Its adjacent bar was where I had many a-run-in with local toughs. As 16-year-olds we got drunk and watched the strippers there on Sunday lunch-times (imagine a mob of 150 baying adrenaline-driven yobs screaming at the girls to get their kit off). The police tried many times to have the pub shut.

Today, the town has a run-down early 1960s feel that’s more “up north” than “down south”. There’s boarded up shops, cheap clothes and food, a very bad cafe and an Indian restaurant which serves abusive racists once the pub shuts. Gangs of young kids roam the streets – it’s an intimidating place to be.

Yet, still, I remember that my gang of West Ham United thugs was a mixture of black and white. Some of us used to leave the footie on Saturdays to help the Socialist Workers’ Party beat up National Fronters, some of whom were our school mates.

I can’t put my finger on Elm Park’s decline. I also don’t want to go blind to the good that remains (hey, that’s my home and I’ve friends still there) or to sell its decent residents short. Any quick tour of my town’s back streets will reveal the pride many still take in their homes and gardens. Most people avoid the Elm Park pub. They take the train or bus to Upminster or Hornchurch instead. There’s many hard-working people living there.

As I sit in my villa by Zurich’s lakeside, I’m still inspired by the best things in the Elm Park I knew. I’ll be forever grateful to many of its old folk (including my parents and a couple of cops who once roughed me up and then lectured me) who set me straight and told me to get a life, get organised, clean up my act, get educated, and get out of town, when I was kid. But part of me regrets ever leaving its streets. Yesterday I wish I’d been there to tell the BNP to f-off.

9 responses to “Elm Park, the BNP and me”