Tony Blair’s memoirs are the most confessional in years from a world leader. The devout Catholic convert explains why politicians stray from their wives (not him so far as we know), escape to the loo for peace, and seek comfort in drink (in his case shockingly little of it).

He writes about the sometimes bizarre personal behaviour of his colleagues, and asks:

“What is interesting is why politicians take the risk. … My theory is that it’s precisely because of the supreme self-control you have to exercise at the top … Your free-bird instincts want to spring you from that prison of self-control. Then there is the moment of encounter, so exciting, so naughty, so lacking in self-control.

“Suddenly you are transported out of your world of intrigue … and put on a desert island of pleasure, out of it all, released, carefree … It’s an explosion of irresponsibility in an otherwise responsible life.”

Alice Thomson in today’s The Times amusingly remarks that Tony stops just short of advocating adultery as a form of stress relief. But she notes how the white lie of former prime minister Stanley Baldwin that “we are a Cabinet of faithful husbands” ended under Blair. She quotes him saying:

“They [the public] now understand, they empathise, and to some extent they indulge.”

Former Thatcherite minister Cecil Parkinson was never forgiven for fathering a child with Sarah Keays in the 1980s. Fallen Tory minister and now sports commentator David Mellor will always be defined by Antonia de Sancha sucking his toe, says Thomson. But former New Labour ministers Robin Cook, John Prescott and David Blunkett are now more likely to be assessed on their political records or even their croquet playing than their off-side affairs with women, she adds.

I’d love it to be true. But the signs are not good. Foreign Secretary William Hague’s special adviser has just resigned over “untrue and malicious” allegations made against him. Supposedly the two shared a room on the election campaign trail more than once. Who cares what two men did in a hotel room? Their families, perhaps. But the rest of us don’t give a damn if the married shadow and then actual Foreign Secretary is gay or bisexual or not. It would be rather fun if he declared himself a modern metrosexual man in the style of David Beckham, and then still denied the charges.

Of course it doesn’t seem all that likely that a millionaire author would need to bunk up with a staffer as though he were a broke sportsman or musician on tour. But there you go. And one might conjecture why if the events were wholly innocent why WH didn’t just show the media the finger. Though it is plausible that WH felt his wife’s dignity was owed a full-on denunciation of the hacks and their innuendo. Mind you, if the accusations were true, it would still be proper for WH to lie his head off in the style of Hollywood’s “A Guide For The Married Man“, directed with a light touch by Gene Kelly, for the sake of anyone he cared about who cared. 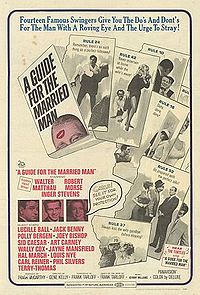 Tony Blair is fluent in French and he has made French values (Swiss, Italian and German ones, too) almost acceptable in British public life. Surely, given that boost, now is the time for David Cameron to say in defence of Hague and his adviser – “move on, it is at worst a family matter. It is of no concern of ours. By all accounts the adviser is a star and good at his job. Both men deny ever having a relationship. Let’s call next business, please”.

I’ll come back to the meat of Tony’s memoirs when I’ve read them myself. But here’s a few first impressions. There’s something very confusing and masked in Tony Blair’s book. Sure, it is confessional: Princess Diana-style. But is it honest about the big issues? My first take is that Tony is all over-the-place and gushing in the book. That’s not helpful when one is interested in finding a rational core to what went on. But then again, his was a three-term emotional roller-coaster of a government from beginning to end. His memoirs, I suppose, were always going to be about him and how he feels and felt, rather than what really went on and why.

2 responses to “Mssrs Blair and Hague, and sex and risk and leadership…”