Italian judge Marco Billi has jailed (pending appeal) six scientists and one public official for six years for manslaughter. They were condemned for downplaying – in their communication – the risks of an earthquake in L’Aquila, Italy, which killed 309 people in 2009. The verdict should send shockwaves through the ranks of public relations professionals, because the precedent it sets could be applied to PR pros just as easily as to our clients and their other advisers.

There is no disputing that the scientists and public official concerned muddled their risk communications. At a press conference, the chance of a large earthquake was described by earth scientist Enzo Boschi,  former head of the national Institute of Geophysics and Volcanology, as “unlikely” but not impossible. After the press conference, Department of Civil Protection official Bernardo De Bernardinis went on the record saying there was “no danger”.

It is not hard to imagine how the importantly divergent messages first left the public bewildered and then feeling let down when the devastating earthquake struck.

But what can we learn from this debacle?

The verdict is unsound

The Italian judge’s verdict was apparently premised on his conclusion that the seven defendants didn’t adequately warn the public of the dangers of a large-scale earthquake. This pre-supposes that there was a known truth – or known hazard – to be communicated and that it was withheld either deliberately or by negligence. But as Seth Stein, a professor of Earth sciences at Northwestern University in Illinois, told Scientific American, our ability to predict earthquake hazards is, frankly, lousy, so “criminalizing something would only make sense if we really knew how to do this and someone did it wrong.” Exactly. The problem, however, is that the public knows little about earthquake science. Citizens of L’Aquila most likely thought society’s scientists and officials had rather more to contribute to the situation than saying the equivalent of “we’ve no way of knowing the level of risk we face right now but we can hazard an opinion which is open to fatal misinterpretation”.

The risk of ritualised risk management

The irony of the case is that the scientists were called in to counter a developing sense of panic that had set in L’Aquila (see here). Hence, perhaps, the biggest mistake in L’Aquila was to place too much focus on the urgent opinions of scientists in response to recent tremors and growing public fears. I fathom that this raised expectations of what could be learned from their intervention. The intense interest in the scientists’ nuanced opinions fueled a frenzied and ritualised media circus that sought to feed on public anxiety over increased seismic activity. But the scientists knew from the beginning they were being asked to answer questions they couldn’t usefully answer.

There was nothing worthwhile for scientists to say about the (imminent) probability of a major earthquake and about its implications for decision-making and public safety. Moreover, what was said (including trying to explain the complexities of seismology in press conferences) became a hostage to fortune.

The alternative, long-term approach, would have been to educate the public properly. That calls for the constant restatement of the reasons why they need to remain calm in the face of the unpredictable, but nevertheless predictably small risks (as in small chance of a major convulsion) they face everyday. (It is widely reported that this is the Japanese approach.)

Scientists are not gods

However, the Italian judge, in common with the media and most of the public, seemingly believes that science is about discovering and communicating truths, including those relating to natural hazards. It is not quite that simple. Science is mostly about accumulating evidence in support of hypotheses. There’s a complicated – and ever changing – relationship between what we do know with great certainty about the natural world and the things about which we cannot be certain. Therefore, some scepticism and tolerance is called for on the part of the public and some humility on the part of scientists. As Francis Bacon put it:

Those who have taken upon them to lay down the law of Nature as a thing already searched out and understood, whether they have spoken in simple assurance or professional affectation, have therein done philosophy and the sciences great injury. For as they have been successful in inducing belief so they have been effective in quenching and stopping inquiry; and have done more harm by spoiling and putting an end to other men’s efforts than good by their own. (Novum Organum) 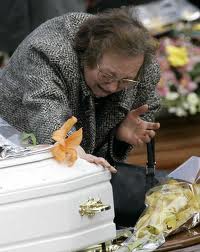 An amusing case study of the danger of over-egging risks was the WHO’s response to the swine flu pandemic in 2009. A recent report in The Lancet lamented the fact that just 2% of Britons said they avoided hugging or kissing family or friends compared with 46% of those questioned in Mexico and 21% in the US. As the BBC commented:

You may be asking why all this matters at all, given that the vast majority who got swine flu experienced a mild illness? It matters because there are plenty of other bugs out there that will happily hitch a ride on our skin and up our nostrils.

That point is vital to grasp because the seven Italians have been jailed because they did the opposite. As the BBC puts it, they were found guilty of portraying an “inadequate characterisation of the risks; of being [with the benefit of hindsight] misleadingly reassuring about the dangers that faced their city.” The problem is that, as the public’s relaxed response to swine flu suggests, if we cry wolf too often (just in case the worst does happen) that risks demolishing the credibility and trust the public puts in official advice in genuine emergency situations. Equally, after L’Aquila the voice of authoritative reassurance has taken a credibility blow in the public arena.

The blame game is unavoidable

Whenever there is an accident and property is damaged, the environment polluted or people killed as a result of nature’s force or man’s activities, or from a combination of both, somebody is likely to be held legally liable. It is as if there is no such thing as an accidental accident any more. Well, actually, there’s some truth to that belief.

Most accidents are down to human failure. For example, modern buildings, including nuclear power stations, can be built so as to survive earthquakes and tsunamis. So one wonders whether L’Aquila’s town planners had been vigilant enough and how much criticism should be laid at their door. Then again, making mistakes should be something we learn from rather than routinely and brutally criminalise when things go wrong. I hope you see what I’m getting at; getting the balance right is tricky.

I’m afraid that none of what I’ve said amounts to a blueprint for managing risk communication challenges. I rather like to think that blueprints (overdone planning and prejudicial pre-suppositions) are unhelpful because it risks ritualising communication; at L’Aquila that manifested itself in calling in the experts and over-egging their significance. Instead, we need to learn from experience and apply knack, wisdom and judgement to each specific case of risk management. We also need to acknowledge maturely that shit happens.

12 responses to “Poor communication is not a crime”