The other day I came across an article that I wrote many moons ago. I am now pleased to be publishing a lightly edited version of that original anatomy of rhetoric, which I thought I’d lost forever.

When it comes to rhetoric, form and matter matters very much. In other words, it is not just what you say but also how you say it that is important. Style should always reflect its intention. Tactile things such as artefacts or the printed word merely produce values or symbols that our senses can comprehend. Sometimes this is communicated almost subliminally, as it is when you walk into the Royal Courts of Justice in London and feel belittled by the high vaulted ceilings that speak of a power much greater than your own.

There’s always going to be a healthy tension between form and content; not least because forms can be easily misinterpreted. For instance, we don’t see past art the same way the ancients did and pictures, unlike words, do not explain their own meaning. Also, the poor speaker is prone to provide too much detail, while the good one sometimes promotes form over substance. There’s something in the old sayings buyer beware and look at things in context. But before I digress more, let’s examine how rhetoric marries form with content in the context of the objective that’s set for it.

In oral and written narratives, the methodologies of rhetoric, developed in a systematic manner by the likes of Aristotle, Isocrates, Cicero and Quintilian, consist of five elements: invention, arrangement, style, memory and delivery. In the traditional teaching of rhetoric, these elements were arranged into three categories: deliberative, forensic and demonstrative. Moreover, speakers in Classical Greece and ancient Rome were taught how to utilize psychology to make each of them compelling by considering the audience in terms of ethos, logos and pathos.

These same body of rules governing the formation of rhetoric remain as relevant today to persuaders (people with ideas and things to sell) as ever they did. To see how they combine to influence outcomes, let’s survey them.

Invention, which has nothing to do with so-called post-factualism, relates to ascertaining the subject matter under discussion, fathoming arguments as proof points and to discovering evidence in support of the key arguments (messages) that you wish to communicate. In academic circles this would be called stasis, or status to most of you, and most certainly to me. But it also deals with deliberation on the appropriate flow and presentation of the argument to an audience in psychological terms; logical verbal appeals versus, or re-enforced by, emotional ones.

The second part of rhetoric is arrangement. This involves organising the material into parts in preparation for presentation. Arguments are aligned and supporting proof points arranged in their correct order throughout the speech or text. Once again it involves thinking psychologically about factors such as soliciting the audience’s empathy and good will at critical moments, particularly in the introduction and conclusion. The arrangement of rhetoric in the right format is determined by its three core forms: deliberative, judicial and epideictic.

Deliberative (or symbouleutic) oratory covers political thought, as well as the likes of advertising and marketing. It is the appropriate form when talking about issues and decisions regarding the future, which need to be made today, or in the near future.

Judicial oratory (or dicanic or forensic) is the rhetoric of reason and legal dispute. Of course, by default what goes on in court is mostly a battle over conflicting interpretations about what went on in the past.

Epideictic (or epideiktikos/demonstrative or to show) is oratory designed to raise our passions rather than to persuade us to take action. It is mostly concerned with births, weddings, funerals, valedictories and festivals and for apportioning blame etc. and it covers all things ideological, and concerning things in the present.

The third part of rhetoric is style. In essence this comes down to correctness, clarity, ornamentation (plays on words, figures, humour etc.) and propriety. And it involves considering the tone of the speech in terms of whether it is going to be grand, middle or plain (these refer to levels of complexity and eloquence).

The fourth part of rhetoric is memory, which refers to mnemonic devices, such as allusions, examples, repetitions, pictures and symbols, designed to help you and your audience remember your message and content. 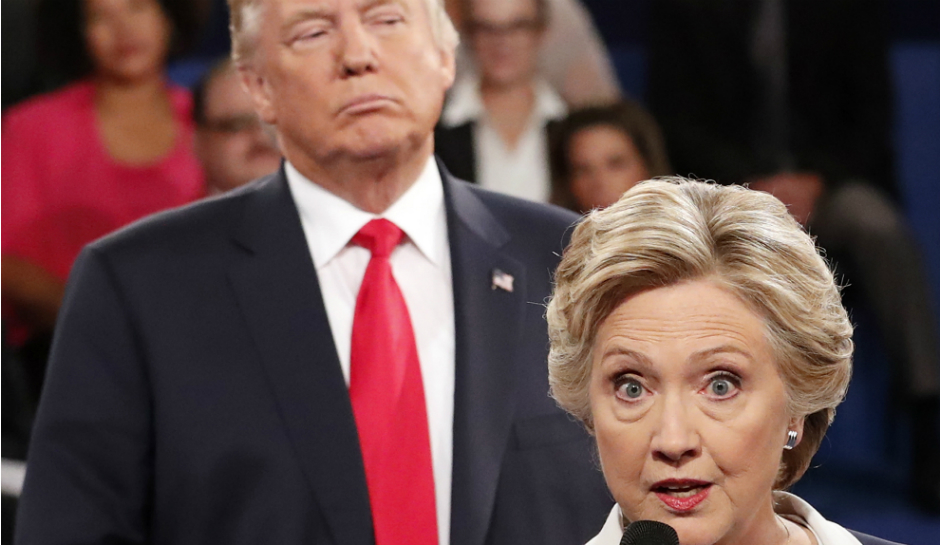 Finally there is delivery. Here one considers the use of the voice; think of Tony Blair’s stutter when he told the world of Princess Diana’s death. Or hand gestures; think of Adolf Hitler at the podium. Or body posture; think of Donald Trump’s conveyance of contempt when he strutted behind Hilary Clinton’s back (see picture above) on a live TV presidential debate.

But to achieve their objectives, communicators must first take stock of the relationship between the speaker, the subject and the audience, using the categories of ethos, logos and pathos, which we shall now turn to.

Ethos refers to the focus on the public persona of the speaker, rather than his or her inner qualities. It involves eliciting empathy and action by communicating the integrity, authenticity or record and character of the speaker or brand or institution, when making an appeal for action to an audience.

Logos  (the Greek word for speech, and here equates to subject) involves demonstrating the merits of an argument by producing convincing proof points as evidence in support of a reasoned account of the matter at hand; whether the points put be beyond question or just seemingly so.

Pathos refers to the means of persuasion. It is about making an emotional connection with the audience. In other words, it is about motivating people to act as desired by appealing to their prejudices, passions, values and capacity to reason.

To excite our feelings, the trained communicator sets out to make a psychological impact. Imagine shock props such as gloves covered in blood at a murder trial or images of destitute, disabled children in wheelchairs and hospital beds in Aleppo, Syria. The juxtaposition of different rhetorical techniques presupposes that the speaker or writer has some knowledge of Aristotle’s syllogisms, which deploy a rolling thunder of premises that move the listener in a reasoned and/or emotional manner toward one final conclusion.

Cicero remarked in De Oratore that “all the force and theory of speaking must be applied in calming or exciting the minds of those who constitute the audience.” But it was Aristotle who first outlined the core ‘eternal’ motivators that communicators must trigger: appeals to noble birth (now, thankfully, rarely relevant), children, wealth, good reputation, good physical condition, influential friends, and security. He also identified seven critical causes of human action: chance, nature, compulsion, habit, reason, anger, and desire.

With motives and changing times in mind, it is worth dwelling on some of the insights of a 20th century American academic, Kenneth Burke. In an innovative flourish that earned him a place in the history of rhetoric, Burke built on Aristotle’s model, which focused on speaker, speech and audience. He transformed literary criticism, and much more, by identifying five categories for rhetoric and critics to ponder: act, scene, agent, agency and purpose. According to him, these categories encapsulate where all human motives begin and end, though not in which order. He writes:

…any complete statement about the purpose behind [or purpose for] an act will answer these five questions: what was done (act), when or where it was done (scene), who did it (agent), how he did it (agency), and why (purpose).” [Source: Kenneth Burke, A Grammar of Motives, page xv]

It’s akin to the press release rule of the answering the five Ws: what, when, where, who and why. But it is also goes much deeper than that journalistic mantra:

We want to inquire into the purely internal relationships which the five terms have to one another, considering their possibilities of transformation, their range of permutations and combinations and then to see how these various resources figure in actual statements about human motives. [Source: Kenneth Burke, A Grammar of Motives, page xvi]

The scene is the background and the act is the action. The players or agents are the actors in the scene and the doers of the act. The why and purpose are perhaps the most difficult of all to fathom, and the most valuable once understood in any specific situation or social setting.

Of course, public relations as a modern discipline only deals with aspects of rhetoric’s realm. Marketing, advertising, politics and other cultural pursuits all use rhetoric independently, up to a point, of PR.

I shall discuss in another post where PR fits in to the wider rhetorical scheme of things and how our role as actors is much narrower and much less influential than many suppose. Not least I shall interrogate that much abused term ‘public relations’ by examining what the ‘public’ (not to mention the ‘public interest’) consists of. I shall also, soon, highlight the denigration of the concept of meaningful relations, when it comes to different interest groups asserting their power.