A few thousand tabloid-loathing Stop Funding Hate campaigners, exercising their wrist action on Twitter and Facebook, have persuaded Paperchase to abandon an advertising promotion, which offered readers of The Daily Mail two free sheets of Christmas wrapping paper. What should the advertising and PR community make of this debacle?

How do we explain the fact that readers of The Daily Mail, circulation 1.4 million, The Daily Express, 400,000, and the The Sun, 1.5 million, were effectively told that they were not morally fit to shop at or get freebies from Paperchase? How did Stop Funding Hate, which opposes mainstream advertising in mainstream newspapers read by the mass public, convince a major corporation that those organs and their readers were hate-speakers?

Our industry must assess coolly how it ever struck Paperchase as a good idea to say to a small audience on Twitter: “We’ve listened to you about this weekend’s newspaper promotion. We now know we were wrong to do this – we’re truly sorry and we won’t ever do it again. Thanks for telling us what you really think and we apologise if we have let you down on this one. Lesson learnt”.

Stop Funding Hate, founded by Richard Wilson, a former Corporate Fundraising Officer at Amnesty International, claims to believe in free speech and to be politically neutral. And yet, Stop Funding Hate labels as hate-speech speaking out in support of Brexit, tougher immigration policies, opposition to Islamism or support for Christian values on marriage, gender and much more. Everything it does is aimed at closing down the freedom of speech and the economic viability of the tabloids it despises for expressing political views it opposes. 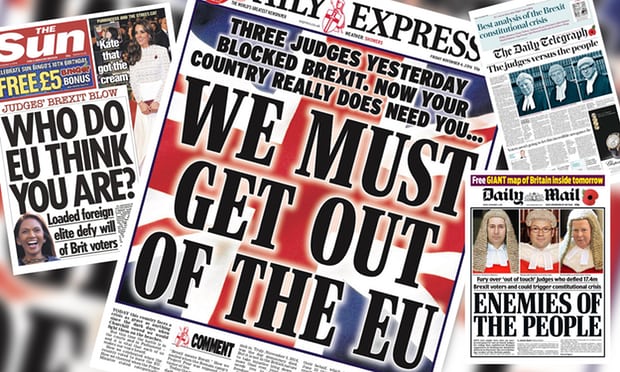 One classic example of Stop Funding Hate’s politicking was its response to the tabloids which labelled three high court judges as ‘enemies of the people’ for making a ruling that seemingly undermined Brexit. While the tabloids turned on the judges, Stop Funding Hate campaigners called on advertisers to stop advertising in any tabloids which had the audacity to question the role of judges in a democracy. And yet, as it endlessly spouts its intense hostility to the views of The Daily Mail and The Sun, Stop Funding Hate claims to oppose “all demonisation and hate speech, whatever the motivation and whoever the target”.  How disingenuous is that?

In response to cowardly corporate capitulations to relatively small groups of social media trolls, it is all too easy to blame the intensity and immediacy of the medium for the urge to surrender. The reality, however, is that corporate retreat and self-denigration in the face of protest predates Twitter’s and Facebook’s influence on both corporations and campaigners. Perhaps the most significant debacle that confirmed the grip of cowardice on the corporate psyche was Shell’s sudden capitulation to Greenpeace’s militant campaign to prevent the Brent Spar oil platform from being disposed of at sea in 1995. Despite the weight of scientific evidence in favour of the oil firm’s preferred option, Shell abandoned its decision to drop the defunct platform at the bottom of the Atlantic on the same day that prime minister John Major was defending the proposal in public: see my How PR sells firms and trust short.

We require a serious discussion about why, for too many years and at great cost, it is that the communication industry has mostly advised corporations to grovel in the face of protests by unrepresentative groups out of step with mass opinion and common sense. We have to grasp why the advertising, marketing and PR industries have not been able to put some backbone into corporate bodies.

The time has come, surely, to stand up robustly for truth-telling and for corporate interests against hypocritical activists.