Richard Edelman argues on his blog 6 AM that we are entering a new era of Mutual Social Responsibility, in which companies will operate differently, partner differently and market differently. Really?

Richard Edelman urges firms to give NGOs a seat at the table and a real voice in discussion to reduce the contentious interaction between civil society and business.

PRs certainly have to make their clients attractive. It is only natural for leaders, firms and industries to find ways to avoid being vilified. Being open to “the opposition” can be part of that.

The democratization of communications will require a more public vetting of the assumptions behind environmental marketing – from green brands to new power plants. It will also mean a conscious decision by companies about whether to be Light Green (at minimum standard) or Dark Green (a green brand, with ever higher expectations).

Richard Edelman is correct to say firms have choices about how “Green” to become.

But whatever they do they cannot be all things to all comers. Some differences are irreconcilable. That said, I agree with Richard Edelman that there is little benefit to be had from being uncommunicative or from trying to fight head on the Green or whatever other zeitgeist predominates.

However, the ethical debate really is a minefield. While the terms “Green”, “organic”, “community”, “non-toxic”, “natural” are deeply attractive words and mantras, they do not capture all the merit, say, from “unnatural” cleaning products, for instance.

On other hand, some natural products such as oil, gas, coal, uranium, and french fries are reviled. The debate around them focuses on their assumed negative – many argue insurmountable – side effects. There’s nothing natural about insulin, but it hardly gets noticed. Meanwhile, Richard Edelman might be right about Hellmann’s “Real Mayonnaise” not promoting its simple natural ingredients enough.

The tough job facing PRs has always been how to defend clients that do not have obvious merit in the eyes of many “stakeholders” or – more precisely – campaigners. Genetically modified crops and food, airports, runways and flying being classic examples.

Richard Edelman argues that the solution is for firms to wrap their reputations in those of NGOs. There is, of course, much to be said for obtaining third party endorsements (not limited to NGOs) and for doing deals with NGOs. My point is that the hug-an-NGO strategy has severe limitations.

Much of Richard Edelman’s approach derives from a negative interpretation of his own PR agency’s 2009 Trust Barometer; a more positive assessment of which, in terms of the level of trust in today’s corporations, I provide here.

My beef is that Richard Edelman over-eggs the “democratization of communications”, and the role NGOs play in restoring trust in firms, when he says:

As NGOs are advocates and not consultants, the new best practices that they create are meant to spread across entire industries, magnifying the environmental benefits. This open source solution is good for both partners’ credibility. Note that in the recent Edelman Trust Barometer 2009, NGOs are the most credible institutions in most nations, with respondents by a 3 to 1 margin asking for cooperation among government, business and NGOs to solve key issues such as global warming (as opposed to unilateral action by business and/or government).

We now see that major NGOs are now willing to work toward a mutually advantageous outcome by partnering with business; by going beyond technical advice to establishment of standards.

That is only half the story. It overlooks the fact that NGOs and debates are not static, but dynamic. Indeed, one can view campaign groups as a set of concertina doors arranged on a sliding scale of positions running from the deliberately accommodating to the determinedly non-negotiable.

No sooner does a firm or politician win an endorsement from one lot than they get a cup of green custard in the face from another. That was literally the experience of Britain’s Business Secretary Lord Mandelson when he turned up to speak at a low-carbon summit in London and Plane Stupid saw the makings of a stunt (see picture below). For sure, the NGO world of protest is a highly competitive slippery fish.

It is also deeply flawed to believe that (most, many, all) consumers are in the same place as NGOs, even of the more moderate ones. And if, as Richard Edelman argues, firms try to mop up, assimilate, accommodate such campaigners, they need to know that this merely creates space for others who will stay out of their reach. That does not mean firms should not court sensible NGOs. Rather it is a warning to firms and PRs about the limits, effectiveness and motivations for doing so.

Moreover, as Richard Edelman notes, the premiums to be had from so-called ethical brands are falling. He gives the example of ASDA which puts it at 10%. But the more firms that go down that route the more “ethical products” will become mere commodities until there is zero premium to be had.

His (Gourville’s) research on car purchase behavior indicates that while people are interested in miles per gallon they are unwilling to sacrifice comfort and styling. Several clients shared findings from their research which found that people are interested in living more green but unwilling to sacrifice convenience and effectiveness. People today expect a company to ensure their brands to be, say, environmentally sustainable, and they are not necessarily willing to pay more.

The future – particularly in this recession – is likely to see a resurgence of lean-mean marketing machines advocating no frills good value. The recent success of KFC, McDonald’s and Wal-Mart surely owe more to the relevance of their core brand values in today’s tough conditions than it does to them becoming ethical (which they always were) or them promoting green and organic practices (which they now rightly do).

His marketing advocacy for his firm’s role in managing “a new era of Mutual Social Responsibility”, which results from doing deals with NGOs, has severe one-sided limitations for the rest of us – even if it brings Edelman’s PR firm much new business.

PRs bring to the table diplomatic expertise that takes account of the wider view of the social and business world. Our job is to advise firms about the consequences of issues they might otherwise miss or misinterpret.

My message is that the world is going to be a much more topsy turvy place for PR firms and their clients to operate in than Richard Edelman suggests. This is going to throw up a variety of strategies for firms to adopt – only one of which will be the Mutual Social Responsibility approach. 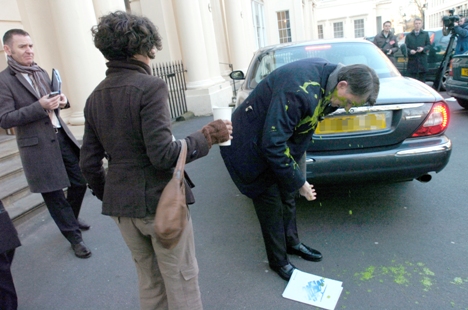 One response to “Play nicely, and you’ll still get green custard”