Out tomorrow, a film that’ll mean a lot to me, Sex & Drugs & Rock & Roll, a biopic of my hero from Upminister, Ian Dury. I’m not sure I’ll be able to watch it without crying.

I’m from nearby Elm Park on London’s East End border. Ian defined my white working class identity, theatrically and parodically thuggish, gaudily irreverent. Bits of Byron and bits of Mr Pastry thrown in. He was more art school than me (and back then, the difference between art school, university, technical college and plain worker was quite something).

Ian embodied English white working class culture long before my clan recognised the chip on their own shoulder. But this was suburban streets working class – 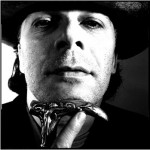 lower middle really – not even your two-up, two-down terrace (later your seven-storey, deck access) working class. His was no racist spat. He was a Bohemian with an attitude problem, aesthetic aspirations, with a bully-or-be-bullied cockney swagger. And then there was the limp, which made him sit up and fly right in a way.

For all his career I identified with his roots and vast grasp of the world of music, poetic lyrics and his f***-you, leave-me-alone guttural gruff Essex-boy bellow. During my teens I pushed fruit & veg barrows on Saturdays on Romford Market, and on Sundays I unloaded the van and manned the stall selling blankets and bedspreads on Peitticoat Lane, Wentworth Street. I knew where Ian was coming from: his father drove somebody else’s Rolls Royce, my father worked on the back of somebody else’s Routemaster bus.

I left Dury Falls Secondary Modern in 1975 with no qualifications. (Even my school in Upminster Bridge was a punning homage to my later hero.) I was into football violence and Motown. Friday’s and Saturdays were for getting drunk and punch ups.

My first job was as a railway operating apprentice on London’s Underground. I lasted one day. I phoned my mum from White City tube station and told her I’d resigned because uniforms with caps were not for me.

Instead, I enrolled at Havering Technical College. Everybody was shocked – I’d failed both maths and English at school. What people didn’t know was that when I was bunking off school (I was rarely there in the final year) I was wasn’t out causing trouble. I was touring London’s museums. I was gate-crashing lectures at the Science Museum, Victoria & Albert and the British Museum put on for other schools’ parties. My horizons were being widened.

I knew there was a better world out there than wasting my life in the Elm Park Hotel, as rough an East End boozer as ever there was, or at Zero Six in South End, with its Kermit Pogo Stick Double Ups and onstage knees-ups. So I told London Underground to do the other thing and set out on my great adventure to develop myself.

At Havering Technical College I was a chaotic disaster. I spent too much time flirting in the Spencers Arms at lunch time to ever stand a chance of passing my exams. But from the students’ union events I found arty films, left wing politics, Ian Dury and how to lose badly at poker (no logical connection).

I was never fully comfortable with punk, which like the hippies I dubbed middle class wankers. Motown became boring. I needed something more grown up, more modern, more me. The Clash appealed, I’ll admit. I liked the Sex Pistols, but couldn’t stand their act-tough but soft fans. I sang Tom Robinson’s Glad to be Gay at the Victoria Park anti-racist gig in 1978. Those were empowering times that opened our working class eyes to new ideas.

I’ve never forgotten seeing Ian Dury and The Blockheads at Hammersmith Odeon. During the break my gorgeous companion distracted the man behind the kiosk in the foyer with a full-on view of her bust while I stole a large box of Maltesers. It was very Ian Dury:

In my yellow jersey, I went out on the nick.
South Street Romford, shopping arcade
Got a Razzle magazine, I never paid
Inside my jacket and away double quick.
Good sense told me, once was enough
But I had a cocky eye on more of this stuff
With the Razzle in my pocket, back to have another peek

If the film lives up to the great reviews it has been getting, I’m gonna be in for a treat.

If anyone had told me, back then, that I’d be living in perhaps Switzerland’s most prosperous village, on Zurich’s lakeside, amongst the billionaires, bankers, oligarchs and entrepreneurs, I’d have said they were Barking as well as Romford. Reasons to be cheerful? You bet!