Gordon Brown’s “Bigotgate” gaffe was fabulous. He’s caught complaining that his staff put him with the wrong sort of elector (having said he was opening himself to all comers) and then says he misunderstood what Mrs Duffy was saying. What’s to learn? 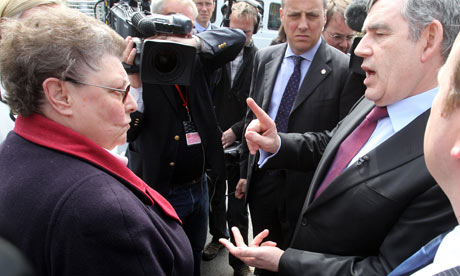 My first instinct was to defend Gordon. My second was to laugh. My third was to sympathise with a man who can’t get his relations with the public right. But we need to remember: Tony Blair was always awkward if caught on the hop and (unlike Brown) brilliant in nearly every encounter. But remember, too, Brown is very good in seminar-like discussion where he comes across as intelligent, responsive and funny.

There are few lessons to learn here, except the counsel of perfection: never say anything remotely interesting to anybody or about anybody, ever, even in private.

But let’s put away the PR rule book and look at what happened. Gordon Brown is a self-righteous man who thinks he is profoundly misunderstood. He has swallowed a 1970s and 1980s PC, anti-prejudice, enlightened rights-mantra, heart and soul. He thinks the rest of the world needs to catch up with this ethic and hasn’t. He meets a working class woman and doesn’t spot that she’s thoughtful and wants him to front up about the deficit and isn’t thrilled by immigration. Clearly, she doesn’t get his deep and enduring value to the economy and the ship of state, and he suspects she’s probably a racist too. Because he knows the media hate him, he’s sure they’ll lap up this old bird. He does what he always does: sees a disaster, especially a personal disaster, and casts around for someone to blame. That would be, in order, the old girl and his own staff. Probably deep down, he’s lacerating himself.

If this had been any other politician, he would have thought the micro gig went quite well (had he stayed silent that’s was how it would have been remembered). End of.

This being GB, he saw a disaster and then compounded it. After that, he did the only thing he could. Grovel, and quick. Otherwise it would all have dragged on interminably. This is also true to his own lights. Like many an old lefty, Gordon sees racism all over the place where it isn’t. By the same token, calling a person a racist is the biggest insult in his canon and calls for self-flagellation when the term is abused.

I do see the logic of saying this is a classic case of overdoing one’s PR response to a small incident (my PR rule book says so, for sure). Certainly, Bigotgate and Mrs Duffy and Gordon’s apology is now the lead story in today’s The Sun. There she condemns him and explains why she no longer plans to vote Labour. His gaffe is now the No. 1 distraction story and embarrassment of yesterday and today and perhaps of the rest of the campaign. That was an example of crisis management of the worst kind.

Actually, though, I think this was not an ordinary PR incident (yes, the PR rule book that I normally draw on in this blog is sometimes totally useless), capable of being handled by ordinary brave tactics and a wry shrug and a respectful public apology etc.

That’s why I can also see the point of and, indeed, I warm to Mathew Parris’s assessment in The Times (his view would normally be mine for anybody but Brown):

“Who did this to him? Who advised him to centre the day’s campaign coverage on Mrs Duffy’s front door? Are the people around Labour’s campaign so shell-shocked, so battle-weary, so insulated from real people by a Maginot line of marketing and communications advice that they have lost confidence in their own assessment of how the public think?”

Though my guess is that his aides did try to stop him spending so much time in conference with Mrs Duffy in her living room; as another article in today’s The Times suggests.

Yet it is my view that this mess was the authentic Gordon Brown. It had to play out as it did given his history of apology avoidance and past arrogance; otherwise a worse climb-down might have been dragged out of him (it’s a moot point).

Oh dear. But I doubt it will determine the outcome of the election. Moreover, he’s got a chance to turn it to his advantage when the other two leaders tease him about the incident tonight in the Election’s final televised debate. He will have been told that his gaffe was factored into the election even before it happened. He can say, “I’m touchy and clunky and short-tempered. I hate prejudice and maybe that’s why, yes, I’m a bit quick off the mark when people criticise immigration (never mind he too wants to hold it back). But I went round to see her straight away and admitted my mistake. Now, can we talk about what these lightweights would have done in the face of a collapse in global capitalism?”