The International History of Public Relations Conference 2012 is convening in Bournemouth, England, this week. I’m not going. But I thought I’d use it as a hook to explore the long-forgotten story of a barbaric British company that was eventually pursued to destruction by Sir Edward Grey, a leading Liberal and British Foreign Minister (1905 -1916). I think it marks the birth of modern corporate PR.

It is the tale of the Peruvian Amazonian Rubber Company, which, in a shimmy much copied by modern branding gurus, later renamed itself minus the R-word to distance itself from the appalling reputation the rubber industry earned in the Congo. The ‘Peruvian Amazonian Company’, owned by Julio César Arana, operated in a stateless region known as ‘The Putumayo’, after the river of the same name, where its law ruled over the vast contested borders of Peru, Colombia and Ecuador.

From 1907, first in the Peruvian press and later in London’s and Washington’s, the company and its London-based board of directors were pilloried in the court of public opinion for orchestrating human rights abuses on a grand scale. Six years later they were found guilty by the British and American authorities, who in response set out the principles of corporate responsibility, accountability and governance that have influenced our expectations ever since. 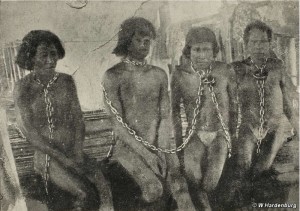 The scandal involved colourful characters. There was Julio César Arana, a businessman who went from selling fancy hats on the Amazon to being an infamous Peruvian rubber baron. Then there was Walter Ernest Hardenburg, a youthful American adventure tourist, who stumbled upon the secret world of Arana’s brutal rubber empire deep in the Amazon. There was also Sir Roger Casement. He had already exposed the rubber business in King Leopold’s Belgian Congo. (In a twist of fate, the British executed Sir Roger for treason in 1916 for conspiring with Irish rebels.) At the company’s head office in London there was Mr. H. L. Gielgud. He became the first PR spokesperson ever to be made ‘secretary and manager’ of a major international corporation during a major existential crisis that had global dimensions.

The background to the story was the roaring rubber trade from 1870 to 1914, which was focused mainly on the Congo and the Amazon where wild rubber trees grew in large numbers. In the Putumayo, out of reach of legal constraints and prying eyes, Arana became obsessed with satisfying the demand generated by modern innovations such as bicycles, automobiles, galoshes and telegraph wiring. Demand for rubber was so strong that his cargo ships stuffed with it would often gain in value between departure and arrival.

But Hardenburg’s account of extreme immoral behaviour in the Amazon was almost beyond imagination in 20th century London and Washington. He claimed Indians were slaves who received no pay; they were kept naked; they were robbed of their women and children; there were floggings and killings, some of which involved crucification head downwards; ears, fingers, arms, legs and testicles were sometimes cut off as punishment; there was no medical treatment.

Such was the disbelief – and fear of libel actions – that mainstream British media initially refused to publish Hardenburg’s account. It was only London’s anti-slavery magazine Truth that was willing to take the first risk (backed later by the Manchester Guardian) of supporting his story. It opened its campaign in 1909 with the shocking headline, ‘The Devil’s Paradise: a British-owned Congo’. As Anthony Smith writes in Explorers of the Amazon: ‘Truth did not publish one article: it published the story for week after week, keeping it on the boil’.

The company responded by spreading lies among Truth’s competitors designed to blacken Hardenburg’s character; claiming, among other things, he was a blackmailer who had also forged bills. The competitor most impressed by the company’s response was the Morning Leader, which published uncritically the company’s version of events. But it received a revealing insight of its own into the Peruvian Amazonian Company’s corporate culture, when a representative arrived to say thank you with an envelope (most likely sent by Arana rather than the British directors) full of cash. It was instantly rebuffed. Then in the best tradition of British journalism, the Morning Leader ran a headline the following day which read: ‘Strange Story of a Banknote; Peruvian Amazon Company and the Morning Leader‘.

The British directors, who added a veneer of respectability to Arana’s reputation in the City of London, responded in a slimy manner. They defended the company, sure. They also reminded everybody, as if it were material, that they were not in office when the supposed atrocities took place. Perhaps not knowing what to do, the directors soon latched on to the potential of Mr. H. L. Gielgud, an auditor who had just returned from the region while working for Deloitte, Plender and Griffiths and Co, who was prepared to deny the allegations outright. The grateful directors immediately made him the company’s leading executive, hiking his wage from 150 pounds sterling to 1000 per year. This jumped-up-clerk and wannabe PR-spokesperson went on to represent his firm in the media and at inquiries and to earn 2500 pounds per year. Gielgud even shadowed Sir Roger Casement, who had been selected in 1910 by Sir Edward Grey to lead a mission to investigate the claims, all the way to the Amazon.

In 1913 a House of Commons Select Committee delivered its findings. They were based mainly on statements made by British Barbadians who were employed by the company in the Amazon, as well as by natives (mainly the Huitotos) who were abused. Arana was found to have had ‘knowledge of and responsibility for the atrocities perpetrated by his agents and employees in the Putumayo’. As for British directors, they were absolved of direct responsibility for the atrocities. However, they were censured in a way that remains a lesson and warning to company directors to this day. The MPs concluded that they had harmed the good reputation of England and that ‘Company Directors who merely attend board meetings and sign cheques… cannot escape their share of the collective moral responsibility when gross abuses under their company are revealed’.

This marked the beginning of the era of corporate responsibility and reputation management we are still in. It illustrated how public opinion, which had already abolished slavery in the British empire in 1833, and later rallied against King Leopold in the Congo, was now a force capable of  expressing (in a manner that could not be ignored) its moral outrage against individual corporations on a global scale. There was no longer anywhere to hide, not even deep inside the Amazon. Directors in London and New York could no longer wash their hands of what went on elsewhere in their name. But there was something else, Gielgud’s over-promotion signified how public relations was set to become the most valued corporate skill of all during a corporate crisis.

Four Centuries of Adventure Along The World’s Greatest River – Explorers of The Amazon by Anthony Smith, published by Viking, 1990 (pages – 285- 324)

One response to “The rumble in the jungle: modern PR’s Edwardian birth”